As a small business you may be interested in a piece of research suggesting that Twitter can foresee the general mood of financial markets.

It’s interesting from a marketing perspective but it could be even more useful if you are working as a day trader and trying to predict the future.

Derwent Capital operated a social media hedge fund specialising in “global sentiment” and the swing in stock movements from social signals. It’s interesting stuff, although pretty theoretical to someone who is not great at number crunching. To a maths boffin with an eye for detail, this might just float your boat.

A particular episode of Money Talk published by the Motley Fool features an interview with Paul Hawtin, the founder of Derwent Captial, and they are pioneering algorithmic software analysing words and language used in Twitter tweets.

The general mood of any given nation can be calculated and used to predict the behaviour of economic markets. It makes sense, because Twitter is a massive data resource and tells us what people are thinking about.

Between February and December 2008 a joint academic study by Manchester and Indiana University collected almost 10 million tweets over several months from 2.7 million users.

The study cites examples of keyword sentiments in blogs as well as Google search queries, which represent a consensus or anticipation of global activity. Book sales or movie success can be attributed to the theory. As part of the Twitter research, publicly available software called OpinionFinder was applied to identify emotional polarity (positive or negative) within users’ Tweets:

Translation for investors: fear or greed.

Moods such as calm vs. anxious, happy vs. sad and friendly vs. hostile were correlated against the fluctuations of the Dow Jones Industrial Average revealing a predictive power of 4 – 5 days in advance.

The findings reported an accuracy of approximately 86% but how this “success” translates into real financial decisions for investors remains to be seen.

In the interview Mr Hawtin states Derwent Captial picked up on the research paper months after its release. At the time of the podcast (6 months ago) he remarked on possible returns of 15 – 20%, but in May 2012 a Financial Times article reported the closure of the fund and the Derwent’s decision to sell its trading indicators to private investors.

The software tools used in the research focused on personal pronouns and phrases to isolate what was regarded as data describing feelings of the individuals. Spam, http links, punctuation and conjunction words were removed from the equation as not to dilute the working data. 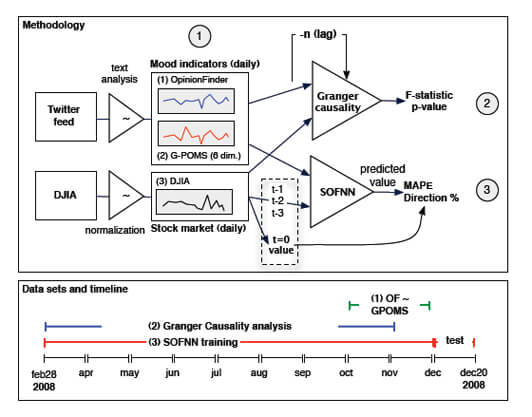 This all looks rather complicated

Although a work in progress, the visual concept above of a computer programme mapping out mood dimensions based on Twitter “expressions” is quite fascinating.

It takes behavioral economics to a new level but seemingly has no long term prediction stipulations; the fickle nature of a nation’s anxiety or calm can swing so dramatically that real market valuations are a bit of a stretch.

The podcast conversation is worth several listens and I’d be interested to see where this research goes in the future. What are your thoughts? Can maths equations together with raw data accurately delve into the complexities of human emotion and tell us more? How valid is the data. Do we express ourselves honestly and realistically online for that matter?

If your only concern is business and marketing in a more “domestic” sense, this might not be all that interesting. Yet it goes to show technology combined with human beings bring us a step closer to gaining certain understandings of those who are ultimately responsible for putting money in our pocket.

The study, released in 2010, can be downloaded as a PDF