If you’re a freelancer working through your own Limited Company – rather than as a sole trader – think carefully about your working practices in light of the latest IR35 tax amendments.

Update: in light of COVID-19, the implementation of the rules are being delayed by 12 months

In April 2000 IR35 was enforced in the public sector to weed out bogus Companies run by individuals skirting around employment status. By operating a Company as an intermediary between themselves and a client, a person could avoid paying income tax and national insurance.

Indeed, before the early 2000s, IT consultancy through intermediaries was popular, with employees leaving full time paid employment on a Friday and coming back on the Monday as a contractor through their own Personal Service Company (PSC).

No longer an employee, they had become, at least on paper, a business. In a matter of days, their tax obligations were very different and more financially favourable to them despite their work duties being the same.

In 2017 Off-Payroll working rules were introduced as a so-called “reform” to IR35 in the public sector, where the end client was made responsible for assessing and reporting the tax status of a worker based on a set of criteria.

Obviously, this was not popular, being referred to as “carpet bombing” and a “blunt instrument”. It’s now also coming to the private sector.

Give Us Yer Money

Over the last few years, HMRC’s clashes with public media personalities in the context of IR35 indicates a belief that contractors, in general, are not capable of honestly assessing and subsequently declaring their tax status.

Therefore, the problem we are facing is this: from April 6th 2020 contractors in the private sector will have decisions over their IR35 status taken out of their hands and placed in those of the client.

From April 6th 2020 contractors in the private sector will have decisions over their own #IR35 status taken out of their hands and placed in those of the client. Click To Tweet

It’s true that many Personal Services Companies are nothing more than disguised employment; sham corporations for tax avoidance,. But genuine businesses are going to suffer too.

There’s untold jiggery-pokery in the world of tax accounting, and much of it is legal (hello, David Cameron!) but it seems HMRC just hates the idea that money in the coffers is pathetically rattling when it could be neatly folded in thick wads.

Because of high profile disputes between contractors and the tax authorities (Eamonn Holmes comes to mind, who lost his argument), past examples have been set only by precedents in case law – not in statute.

The reality of reaching a tax status verdict on contractors is one where most clients will throw up their hands and say “please don’t make me decide!”

If the client is one who does have to decide and does correctly tell HMRC a contractor is just a business and not someone trying to avoiding employment… great!

But if HMRC does their own digging years later and discovers the contractor was telling porkies to their client, guess who’s liable for backdated taxes?

That’s right. The client. And the taxman can go back 20 years.

Administration Burden, Scam or Both?

It should be pointed out that small businesses, according to the UK definition (less than 50 employees, less than £10.2million turnover), do not have to make determinations over IR35.

The decision rests with the contractor.

But where it’s enforceable, a client will not only be required to pay employer’s national insurance but run a contractor’s VAT sales invoice through their own payroll.

It’s a weird situation where the invoice is divided in two: the amount owing and VAT.

Not only is most accounting software not equipped to do this, but it’s also depriving the worker of employee rights while taxing them.

I’ve noticed plenty of LinkedIn job ads soliciting contractors with the proviso “inside IR35” while having the cheek to insist the individual has their own business insurance.

Destruction of the Flexible Workforce

Only the individual operating their PSC can truly determine if they’re a business. The thing is, as I mentioned before, some clients just don’t like this due to the possibility of being chased for owed taxes.

For this reason, a contractor could very easily find themselves “cancelled” as part of a blanket ban on consultants using intermediaries.

Transport for London (TfL) is a classic case where blanket bans of contractors in botched assessments resulted in a walkout.

In the age of fast internet, remote working and the gig economy, work is often piecemeal, seasonal, scarce, uncertain and definitely devoid of rights. #IR35 erodes this even further. Click To Tweet

To that end, some amount of tax relief is solace if a freelancer cannot rely on paid holidays, pension auto-enrolment, maternity leave and the general gamut of employment law.

Part of being a genuine business in the context of tax is passing several tests designed to assess the reality of a working situation.

For example, you might have a number of paid contracts with different clients, work irregular hours, have multiple income sources, your own accounting fees, stationery and equipment costs plus advertising/marketing campaigns.

All of that falls under the definition of a business. Business risk.

Take me, for example. I’m actually a sole trader (not a Ltd Company) building websites for clients on a freelance, project basis.

These websites are created either from my home or the office space I rent locally. How the site is built is up to me but what the client requires is negotiated and informed by a short-term written contract.

What I don’t do is become a regular, punctual dogsbody on their premises.

I am not, to quote HMRC, “part and parcel” of the organisation.

If I do decide to incorporate as a Ltd Company, I’ll know without a doubt I fall outside of IR35.

But will clients go along with that? Will they “agree” or will they tell HMRC something else because they’re scared?

I would need to have a serious conversation with the client well in advance to prove the status. They must be convinced beyond all doubt.

We can assess ourselves against the following three main principles. At this point, it’s not clear to me how many of these you must “pass”:

Do you decide how the work is carried out and completed, or is it a master/servant relationship? If you’re supervised, directed and given no choice on how you work, it’s likely you will be inside of IR35.

Interestingly, Lorainne Kelly argued for her contractor status (and won) on the basis that she conducts her interviews however she likes, chooses her own subject matter and drives the direction of the programmes she presents. Control.

Is the company obliged to provide more work for you once you’ve finished a task? If you’re regularly expected to work for the same client, you probably fall into IR35.

Someone who falls outside the legislation would be asked to go home or await further contact without pay. A real employee, by contrast, looks for something else with which to occupy themselves on company time.

Is it you and only you who can complete the service provided to the company? To be outside of IR35 your Company needs to be able to send someone in your place as a substitute to complete the work.

If you’re a one-man-band, you might not be able to argue this point, but that’s okay. If you can demonstrate the first two, that should be sufficient.

HMRC knows money can be clawed back and I’ll bet their assessment system weighs in favour of “finding” more people to fall inside of IR35 than out.

It makes me wonder. How much ambiguity will linger? To take one example, how will it affect virtual assistants, also known as remote associates?

It’s common that VA’s operate from their home using their own equipment, performing regular tasks for one or more clients.

Assuming the assistant operates through a Personal Services Company, the client may be obliged to pull the trigger and reach a verdict about the person’s tax status.

No self-respecting VA will want to be taxed as though they’re an employee minus rights and benefits. They’ll put their rates up.

As ridiculous as it sounds, a UK based virtual assistance could find themselves banned, cancelled, fired – whatever you want to call it – in favour of a foreign virtual assistant who could do the same job, cheaper and without tax baggage.

Outsourcing overseas to the notoriously cheap Philippines happens all the time.

It’s worrying to think that those genuinely running a Limited Company as a one-man-band consultancy, or perhaps a Partnership, are not trusted by the tax authorities to be forthcoming about their own working practices.

How this will truly impact the country come April 6th is anyone’s guess, although, following pushback and criticism, HMRC is apparently offering a light touch for the first 12 months while things work themselves out. Whatever that means.

I posted a general question about the whole situation on Twitter. Someone responded with a copy of the written reply they’d received from their local MP on the subject.

Take a look. You’ll be gobsmacked at what is surely, surely? a deliberately obtuse, unhelpful attitude. 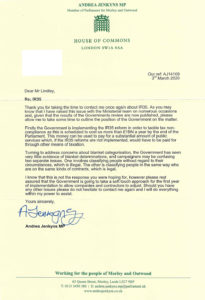 Dave Chaplain of the “Contractor Calculator” has put together a survey on #IR35 ahead of the private sector roll-out.

It paints a very different picture of what we’re being told through official government channels. The report is accessible via this LinkedIn post.

Assuming you’re a real contractor with a PSC, the question is, do you want a client who is:

Incredibly, I just saw on LinkedIn that HRMC have been recruiting Compliance Caseworkers in Newcastle. The job ad said, “no prior tax experience needed.”

On February 26th a 46-minute video was published by the Association of Independent Professionals and the Self-Employed in which evidence is given to a House of Lords Enquiry on IR35. It’s worth a watch.

I suspect what many of us want is to see is a free-thinking MP live on BBC Parliament addressing the house to raise the issue properly.

It wouldn’t be surprising if the government’s tone-deaf stance resulted in said MP losing their cool in a spectacular crescendo of rage, throwing papers in the air and growling the famous Howard Beale line from the satirical 1970s film Network: “I’m as mad as hell and I’m not going to take this anymore!“