If you’re thinking of running paid social media ad campaigns, be prepared for negative remarks on your “boosted” posts. This behaviour comes from a type of troll who knows their own contributions will get extra visibility and undermine your efforts.

Social media is something of a spectator sport where detractive, embarrassing or untrue words published on posts can be quite devastating.

But, if you’ve turned a social media business post from one that would normally achieve modest organic reach into a paid ad distributed far and wide, get ready.

You might attract idiots who want to shout obscenities into the proverbial megaphone you have paid for. Yep.

Of course, trolls vary in severity, publishing anything from passive-aggressive remarks to outright defamation, abuse and threats.

The Internet is young, the social rules are not clear and bloodthirsty online lynch mobs hold a view of the virtual and physical world that is grossly uncalibrated.

Nasty comments are often little more than a work of fiction by individuals looking to sow discord for their own amusement.

Other comments come from sock puppet accounts or spammy agents acting on behalf of competitors.

So, what other reasons might there be for troll comments on social media posts? Here’s a few ideas, in a rough order.

Although some trolls are purely in it for the schadenfreude, others see themselves as rendering a useful public service by shit-stirring in full view of potential customers.

It’s as though they think paid ads are disingenuous, lazy and have only gained visibility through monetary bribes given to a social platform’s advertising system rather than by true organic merit.

There is also that bizarre and well-known phenomenon of certain people resenting anyone having success.

I mean, it’s not a huge stretch of the imagination to say that people who generally dislike business/profit also take the view of “stay in your lane”.

Yes, it’s true that reviews and social media comments are actually sold on the black market.

Search Facebook groups using keywords like “fake reviews” and you’ll find thousands of people selling fake reviews/comments for as little as $1 each.

Then there’s politics. Provocative headlines following some incident in a bar, restaurant, store etc can result in a particular cross-section of society feeling attacked, belittled or threatened.

I seem to recall a cake shop refusing to serve a customer on some political basis, attracting international attention for the wrong reasons.

This lead to angry idealogues co-ordinating their efforts to damage the business via petty online reputation mischief. Their goal was to wreak havoc with negative reviews and comments across various online platforms, including social ads.

This one is just a theory.

Maybe running ads on Friday and Saturday night is not a good idea if there are drunks online looking to cause mischief. It does happen. It happened to me once, so I stopped running ads after 6pm on weekends.

Whether you agree or disagree with the “troll” here is beside the point. Maybe Virgin Media deserved it, but this kind of activity is a real nuisance for brands big and small.

Tell all your mates, existing customers with a V6 (paid for) can’t get a free upgrade for a V+ (2nd box) as Virgin only looking for new customers business.#VirginByNameOnly

The boosted Facebook post below, from SEMrush, attracted negative comments from a user who simply wanted to leave a little nugget of nastiness in the comments section. Three other people “liked” his comment in a show of support, I suppose. 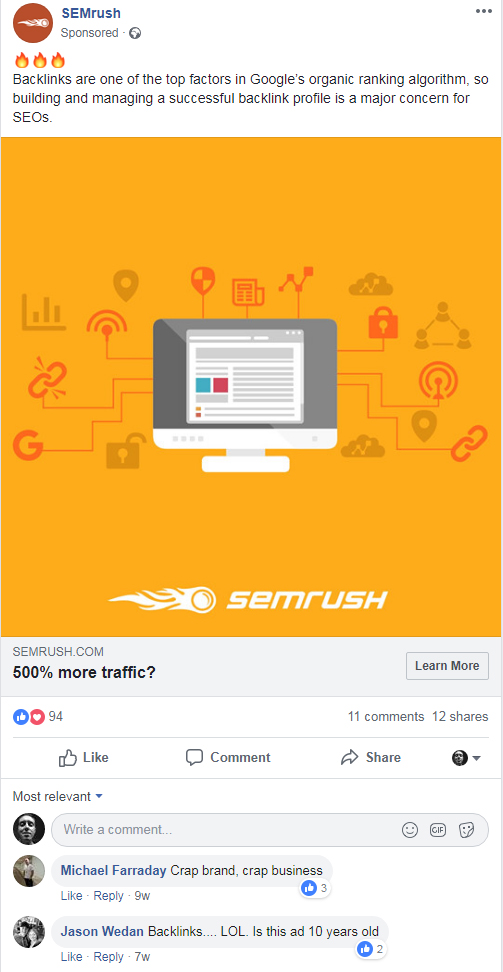 Businesses are seen as fair game for public criticism. Sometimes it is hard to argue with that when large corporations we all love to bash (Amazon in this case) leave themselves open to attack. 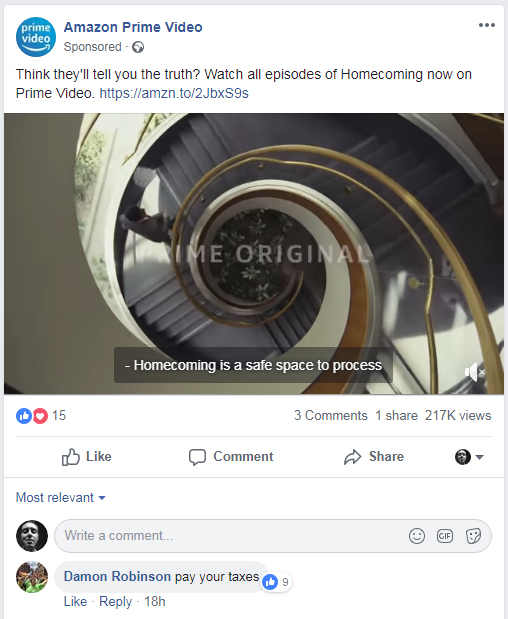 An oil company is an easy target, and in truth, is probably not going to see their bottom line suffer because of what someone else says in the comments section.

A public figure, like a singer, actor or comedian is seen as public property and in the minds of some individuals, deserving of a bashing.

There seems to be a certain amount of relish and gusto when social media users lay into artists they don’t like. 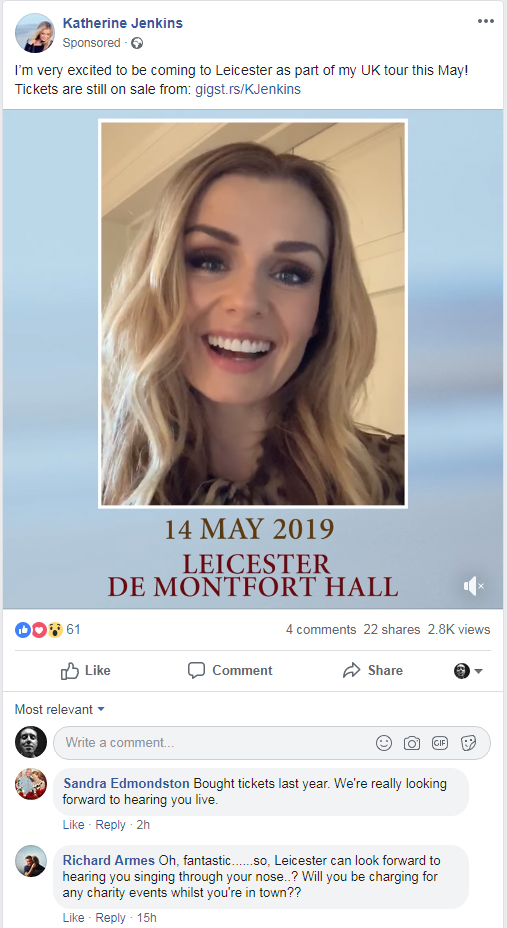 How to Deal with It

Neither can you be seen scrapping or arguing with commenters. It would undermine your brand and the troll would have succeeded in getting a rise out of you.

If people do post outright hate and abuse, see about removing their content or blocking them as a last resort.

But, in the first instance, where the attacks are somewhat mild yet still potentially damaging, the test for the business is in how they respond.

Be Exceedingly Nice and Unusually Calm

The agitating keyboard troll could be the one left looking stupid if his or her criticism is handled so well that the negative attacks are turned into positive defences.

Be stoic. Calm. Friendly. Engage with them and leave out any aggression you feel.

See it as an opportunity to answer objections for the benefit of all those users who are reading the comments but not participating publicly in the conversation.

Author and speaker Jay Baer says to “hug your haters”, which, I suppose, is a riff on the phrase “kill them with kindness.”

However, we should tread carefully here.

It might mean people can get away with hate, slander and threats because no-one is challenging them over it.

One way trolls can be defeated is if your core customers or biggest fans defend you.

If they see a damaging comment and publicly disagree with or dismantle it on your behalf, you get to save face as well as receiving some positive third-party public testimony.

If you were to “boost” a previously posted status, you could boost one that has existing comments where any negativity has been well-handled by your supporters.

So yes, you’d be paying to highlight negativity about your brand, but you’d also be highlighting any instances where the idiots were put in their place.

Raising your head above the parapet will always invite trouble from those who enjoy bullying a business where there is little to no comeback.

Trolls no longer hide under bridges waiting for a victim. It’s more like they’re wandering through town defacing billboards.

In extreme cases, an individual may say things they don’t even believe, where their true intention is to cause outrage, disgust, upset etc.

The maxim with online communities has always been “don’t feed the trolls” but now it seems we must say “don’t fund the trolls”, which is exactly what happens if they are allowed to succeed in truly derailing your paid social media posts.