Is your website easy to use, logical and intuitive?

Whether you’re a business owner, manager or tech person, Don’t Make Me Think by Steve Krug (pronounced Kroog) is essential for those making decisions about website design and development.

Written in 2000, updated in 2006 and revised again in 2013, I guarantee this book will open your eyes to problems you never knew existed. This well illustrated guide is one that can be referenced frequently in the pursuit of producing smoother websites with less sticking points.

While some site visitors will grimace and put up with a bad experience, the rest will leave. Yes – the browser Back button is clicked more than any other!

Despite the last iteration of the book being in November 2013, the principles hold up pretty well; in terms of how people navigate sites, we’re dealing with the unchanging habits, quirks and prejudices of human nature.

A chapter about the constraints and trade-offs of mobile design have been added, although, since 2013, we’ve seen a Google-led renaissance for the small screen with the likes of Google Accelerated Mobile Pages. There’s also their no more pop ups advice and http security warnings in Chrome.

When we pre-empt website user behaviour based on what we already know to be true about people, many potential problems might never arise. There is an entire industry dedicated to User Experience Design, or, to coin the abbreviation, UX.

Let’s step back for a minute and give some consideration to the usability of everyday things outside the realm of screens and pixels.

When was the last time you had to read an instruction manual on how to operate a light switch?

Or a pair of shoes? A fork, a door knob, a t-shirt? A set of traffic lights or a book?

Never. You’ve never had to learn to operate such things because your understanding is obvious and intuitive and automatic. That’s thanks to good design.

Now think about the worst customer service phoneline you’ve ever used. I will bet it involved an illogical audio selection or dial pad menu.

Krug states usability as such:

The first law of usability is “Don’t Make Me Think.” Eliminate question marks in the minds of the users. 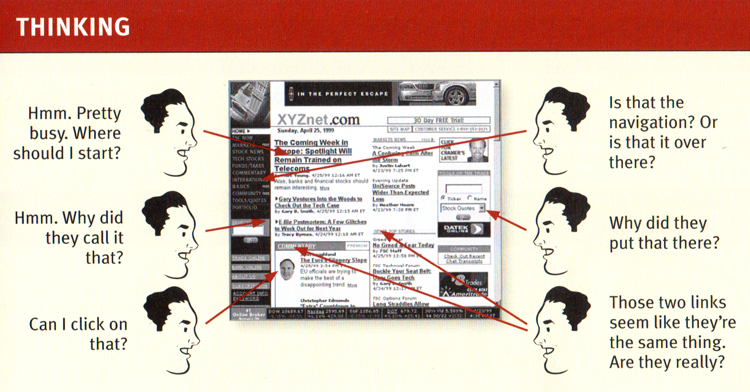 When you’re creating a site, your job is to get rid of the question marks.

A Common Sense Approach to Web and Mobile Usability

To give you an idea of what to expect, here are a list of chapters.

Finding Your Way Around the Web

In the first few pages, usability is defined as follows:

A person of average (or even below average) ability and experience needs to be able to figure out how to use a thing to accomplish something without it being more trouble than it’s worth.

I love the comparison between websites and stores beginning on page 55. One is virtual, the other physical, yet we navigate the space in the same way, with a set of unconscious objectives either helped or hindered by the design. 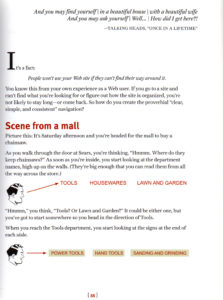 The flowchart diagrams below demonstrate a typical consumer journey in a physical store.

Now, imagine this concept applied to your website. Substitute real signs, notices, aisles, shelves and ticketing with their virtual equivalents.

Imagine how the positioning of elements, use of headings, choice of colours and wording of hyperlinks can either frustrate or delight a visitor. 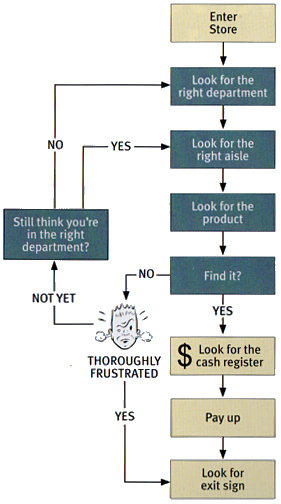 Basically you use the store’s navigation systems (the signs and the organizing hierarchy that the signs embody) and your ability to scan shelves full of products to find what you’re looking for.

It’s a decision based on a number of variables – how familiar you are with the store, how much you trust their ability to organize things sensibily, how much of a hurry you’re in, and even how sociable you are.

A good chapter is chapter 7 – “The Big Bang Theory of Web Design” – which is about the importance of getting people off on the right foot.

Site identity and mission has to be communicated quickly and clearly, typically by way of the logo area positioned on the top left and a description underneath or to the side of that, aka tagline.

Good taglines are personable, lively, and sometimes clever. Clever is good but only if the cleverness helps convey – not obscure – the benefit.

Many core design elements should be respected as part of the orthodoxy of design, and yet they’re so frequently overlooked.

Case in point: remember when Microsoft got rid of the Windows 8 Start button on the bottom left? There was outcry because a reliable, well known staple feature had been removed without considering that people actually wanted and needed it.

There are dozens of rules for web design that only tend to stand out when they’re disobeyed, or absent. When the rules are adhered to, the user experience becomes seamless. There is no disruption to the flow of using the site.

A site should aspire to be:

Frequently, too many stakeholders personally intervene with requests, additions, agendas and constraints. This is amusingly documented in the cartoons:

The phrase, “a camel is a horse designed by committee” should be written on the inside page of the book before being passed around and fully absorbed by all colleagues and associates working on a project.

Some developers and designers are unable to temper their own creativity. Instead of keeping things logical, simple and helpful they become enraptured with fanciful notions that are nothing more than gimmicks.

If you’re a more enlightened developer, you may be tasked with steering clients away from any requested design features known to be self-defeating.

Autoplay videos, splash screens, complex navigation, too many typefaces and slow load times are some of the things that irritate users and tax their brains.

How to Conduct User Testing

Later chapters talk about user testing, which serves to reveal truths and dispel heated discussions between the project team that may not have been important to begin with.

Practical tips on how to conducting testing include how to record device screens.

In my experience, using software such as Screencast-O-Matic (a tiny annual price for the premium version) for desktop PCs is a good method because a mic can be set up so that both video/audio is captured for later playback and analysis. 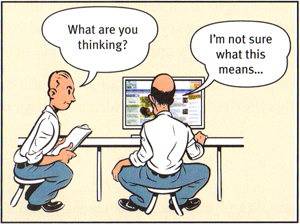 For mobile, both Android and Apple include video/audio screen recording in their operating systems. This means no awkward jerry-rigged camera set up is required.

It’s also vital to explain to all users taking part in the tests that you’re testing the website, not them.

However, we must remember that there IS such a thing as user error – like entering passwords incorrectly, misspelling something or allowing a website confirmation email to land in “Junk” without checking.

I tweeted Steve Krug about the recently introduced screen recorder to the recent version of iOS – the mobile app that can capture audio/visual activity on handheld devices.

His DIY camera rig blueprint for user testing on phones (page 162) is now redundant. It’s just not necessary when most phone screens can be recorded. I wonder if that section  will be removed from the next iteration of the book?

Analysis: A Brilliant Guide to Creating a Well-Oiled Machine

This is a thin book, easy to read, humorous and colour illustrated in a way that few are.

One Amazon review remarks, “Most usable book about web usability, funny and easy to read.”

I innocently started reading this book at work before, then struggled to put it down to get any ‘actual’ work done! Fantastic read – and like @skrug says “it’s not rocket surgery” – thanks for the recommendation @debrawilsonsays ??? #webusability #dontmakemethink pic.twitter.com/7CFGikGXxo

Whether you’re the person who actually pushes pixels or the one who hires someone else to do that for you, you want both the business and the customer to be successful in their objectives.

Remember to adopt the philosophy of good usability, which I’ll repeat once more for emphasis:

A person of average (or even below average) ability and experience needs to be able to figure out how to use a thing to accomplish something without it being more trouble than it’s worth.

Make your website well-oiled business machine, not a wouldn’t-it-be-nice vanity project. Kill your darlings. Say “no” to obviously bad ideas and question your own held assumptions.

You can buy the book online on Amazon (affiliate link) or at most good book shops.

If you don’t want to purchase it, see if your local library stocks it.