Here’s the premise: our long established interruption-driven tv, radio and print advertising industry has been undermined by the internet, hence the idea of “pixels” instead of “degrees” of separation. 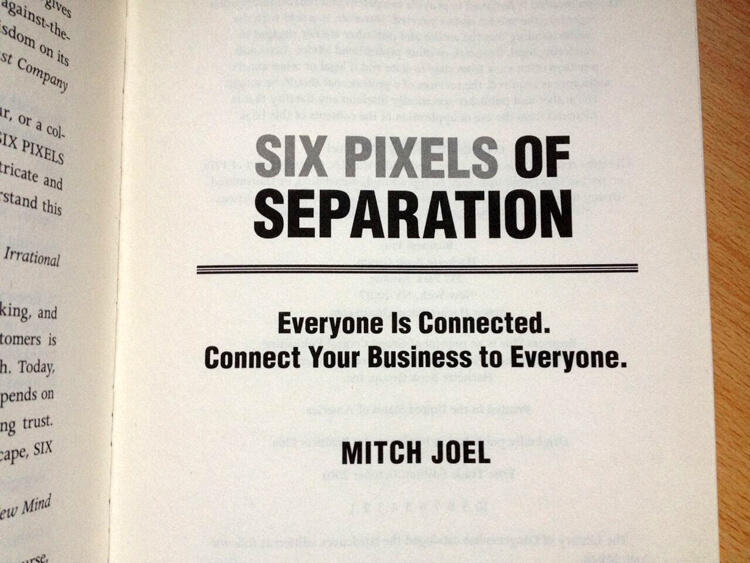 Throughout the book the author passionately discourages the top-down quasi-religious echo chamber of ingrained business practice.

It’s fair to say that although many 21st century businesses are former traditionalists weening themselves from the old media empire, there’s still much to be desired.

The general consensus is to stop broadcasting and start connecting. But I’m sure there are representatives of industries/jobs/positions in which fully feathered nests will not be given up so easily.

I asked for the book as a Christmas gift in 2014, having no idea what it was about. I didn’t even realise it was relatively old.

Even so, I’m glad to have it because it’s a good recommendation for internet marketing beginners wanting to learn the principles. 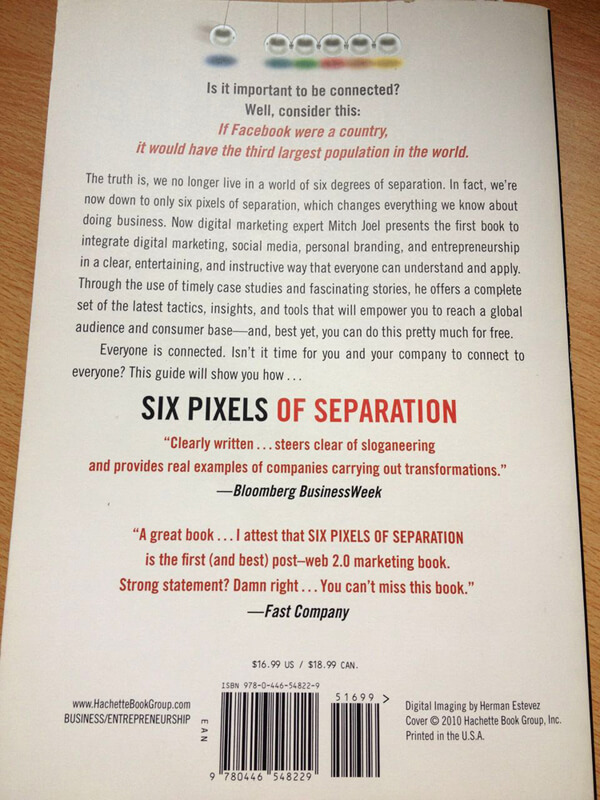 From Print to Web

I’d better tell you a bit about the author. Mitch Joel was a journalist in the eighties and started a digital Marketing Agency back in 2003.

Unable to get a gig as a writer in trade publications, he began independently producing online articles about his line of work using a free tool by Google called “Blogger”. (Most of us are on WordPress these days!)

This was a way for him to reach new clients, make a name for the agency (Twist Image) and “publish his way in” to the web industry.

The content marketing approach is becoming the standard approach today but was not so much the case in the early 2000’s.

Most journalists are, among other things, trained in editorial standards, critical thinking and shorthand.

But a business owner with no budget and no formal education in publishing can still earn market influence.

This is in sharp contrast to the classic long-winded publishing route via an editor, mock up, printer, distributor and all the other gatekeepers, barriers or hurdles.

Traditional channels for marketing, communications, advertising and public relations are cost prohibitive for smaller businesses who won’t even know if an ad campaign was effective until it’s over.

Editorial marketing, online copywriting, blogging – call it what you will – is how people consume information. Part of business is giving your market what they want. When your audience demands rich, useful, informative content on a mobile device, why withhold it?

“These newer channels – the ones that make Six Pixels of Separation possible – seem confusing, counter intuitive, and even scary to some corporations. They’re worried about “opening up”. What choice does any business have in this new world of radical transparency?”

Is the Book too Old?

Some of the tools mentioned throughout are out of date, have changed significantly or have been retired.

These include Google Alerts (not as good as it used to be), Google Reader (gone), iGoogle (gone), Technorati (shifted its focus). 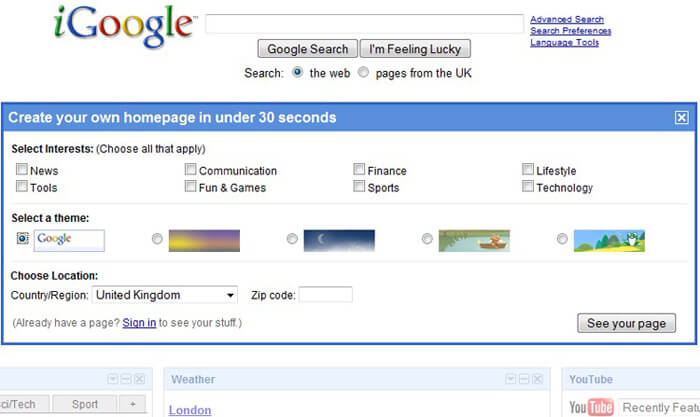 I still miss iGoogle. It was a personal RSS homepage that eventually shut down

In principle the book has aged well. It puts most emphasis on the why and what questions businesses want to ask.

If you want to learn “how” to do things you’re better off using the internet to look up tutorials and guides.

I liked the second chapter – The Trust Economy – in which the notion of “giving before you get” is examined through the likes of eBay, Amazon and the social economy of product reviews.

There’s also a spotlight on the music industry and its long suffering business model.

In 2007 Radiohead released their album In Rainbows for free. Fans could download the album and pay what they thought the music was worth.

About 40 percent of those who downloaded In Rainbows chose to pay an average 6 dollars, which is not bad for an industry in which selling music as media is hard.

Obviously, some people will steal music regardless of how a band choose to distribute it, but at least Radiohead got some of their money’s worth when they earned $10 million in less than a week. 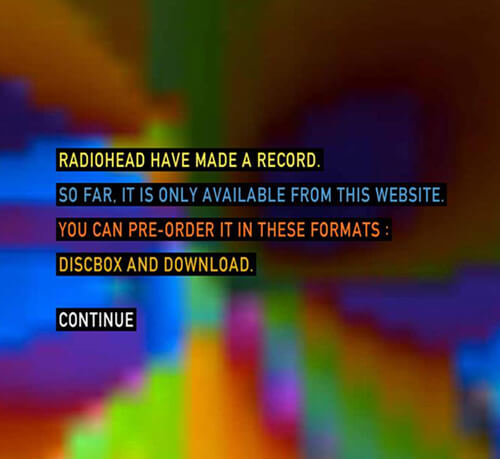 Lars Ulrich of Metallica famously opposed Napster over copyright infringement and royalty disputes. This actually backfired and got the band a bad rep back in 2000.

Radiohead, on the other hand, took the unprecedented step of giving away music knowing a decent chunk of true fans would cough up. They trusted their audience to reciprocate.

Let’s get one thing straight though: the band had spent years building their reputation and creative output.

“It’s a prime example of the trust economy and this new marketing value system.

When you engage in a conversation and treat your consumers with respect and as your peers, magical things will happen.

It worked because Radiohead has already spent six albums’ worth of time and touring adding value to their community.

While it definitely did not outperform the sales of some of their past hits, the concept created an overarching halo effect that reopened the conversation around paying for music.”

It’s hard for the traditionalist businesses owners to reconcile themselves with the idea of giving anything away because it flies contrary to concept of being logical, selfish and profiteering.

The single-minded, self-interested behaviour is known as Home Economicus but Homo Reciprocans is probably a better economic theory for the trust driven, content creating reciprocal-aware agents that inhabit the online world.

Some people simply fail to see or participate in the trust economy.

A local business advisor once told me I must absolutely charge for absolutely everything I do.

Even a free eBook I had compiled for some local businesses.

The business advisor seemed to be under the impression I was allowing people to take advantage of me when I was in fact making a name for myself through a loss leader product.

A common business model is to offer free content in exchange for an email address to build your subscriber list. How else are you going to compete in an abundance economy? Buy your way to the top of search engines? Rent billboards?

Use permission marketing. Give away your stuff, earn trust and monetise further down the road. That’s the business model.

Other parts of the book touch on blogging, social media, audio, video and even meetups. The latter grabbed my attention because I’m interested in organising a local WordPress social club.

The author also writes about building credibility around your brand: that is to say, if you’re any good at what you do, prove it.

Another passage I liked was in chapter 4 – Faith-Based Initiatives, Viral Expansion Loops, and the Long Road – under the subheading “Think Ripples, Not Splashes”.

Here’s the passage from that chapter:

“Traditional advertising campaigns have a striking resemblance to a big splash in a pool of water.

In fact, it’s not uncommon for the marketing department to get a call from the C-level suite asking to “make a splash” for the upcoming product launch.”

“Splashes do work (when done right), but only for a very limited time.

You drop a rock in the water, and the splash comes up high and fast, but fades just as quickly.

The only way to keep your momentum is to keep making splashes. Splashes are also expensive to start, execute, and then repeat.”

The idea of quietly making ripples is the polarity here. He says:

“With less energy, you can toss a small pebble (your ideas) into a big lake and let the ripple effect take hold.

True, it’s not as dramatic as a splash, but it sustains itself for a longer period, covering a much wider area.”

That idea has driven online success for years.

The book outlines the all important leg work he calls the 5 C’s of Entrpreneurship 2.0. It’s vital if you want to build a sustainable business:

Six Pixels reads like a medley of Seth Godin’s work, which is no bad thing.

Mitch Joel and Seth Godin have shared the stage and given dust jacket testimonials to one another’s work so it’s no surprise they share similar views. 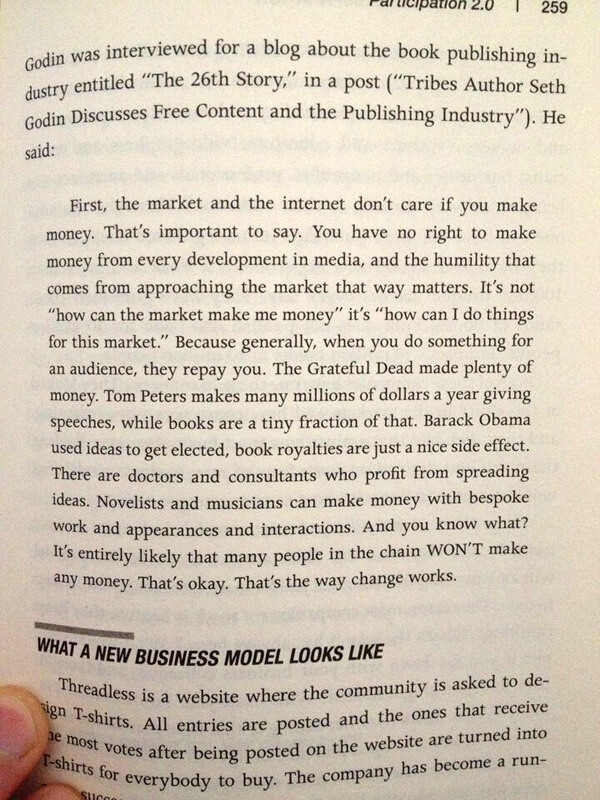 In 2015, the idea of online content marketing still has its problems. Persuading people to create in the first place is an issue, but so is getting them to slow down, develop a strategy or just stop altogether.

Come on. We both know there’s a lot of shit out there.  Misleading or low quality content accounts for the one thing that stinks up the internet: SPAM.

If you spent the rest of your life online you wouldn’t consume 1% of what is available. And you probably wouldn’t want to!

Generally, the book is ideal for anyone starting out as a digital marketer. You might have run a business for years but still need guidance on how to take advantage of new media and internet channels.

One’s ability to reach others quickly online has turned everything as we know it upside down. Between me and you, I believe the way things are now is the right side up.

Six Pixels of Separation could do with an update to reflect the zeitgeist, lose some of the length and use shorter sentences. The overuse of conjunctions bugged me. Illustrations would have been nice too, but at this stage, I’m nitpicking.

The author, Mitch Joel, was featured on the Social Media Examiner podcast, which for me, is a good enough endorsement for me wanting his book for Christmas last year.

Incidentally, me trusting the podcast of an online brand enough that it compelled me to purchase a book I’d never heard of is exactly what it’s all about.

You can buy the book online on Amazon (affiliate link) or at most good book shops. If you don’t want to purchase it, see if your local library stocks it.