Tribes is widely considered the de facto modern marketing manual. If you run a small business, I encourage you to read it.

It makes a compelling case for ordinary people filling the enormous power vacuum left behind as production monopolies are eroded.

The central idea is that the social groups we belong to today can be traced back to the tribes in the early history of mankind.

The connected economy of the information age has killed mass marketing. Everyone and anyone has a voice. The internet is a platform for sharing ideas with those already interested in the same things.

This, the author urges, is a window of opportunity we must seize in order to forge strong, meaningful connections in the post-industrial marketing landscape.

The paradigm shift is self evident, and yet even now in 2015 some of us would rather cling to the factory led model that has served us for over 150 years. 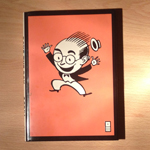 The overlap between the author’s other titles is apparent. He describes himself as someone “trying to scratch an itch,” so that explains the common territory shared by his work.

Since he is one who frequently breaks the rules in the publishing world, I was unsurprised by the absence of a page of contents.

The book is 150 pages long and reads like an epic blog post, punctuated with bold sans-serif headings.

It took me a little over a week to read it. There’s an audio version online as well. 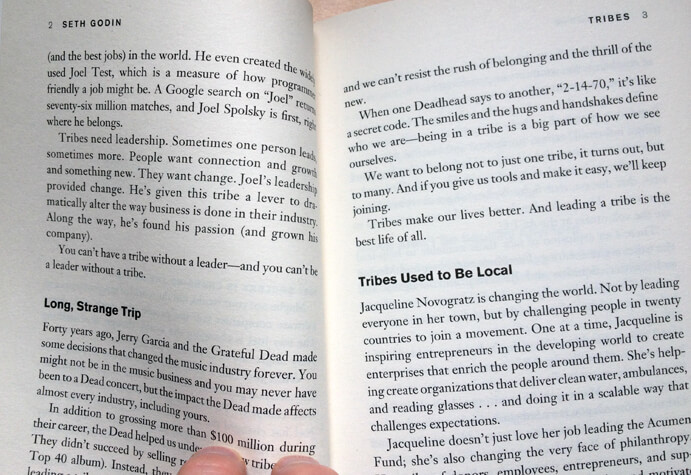 I’m interested in what the book has to say about bringing people together for some mutually driven benefit, however small. 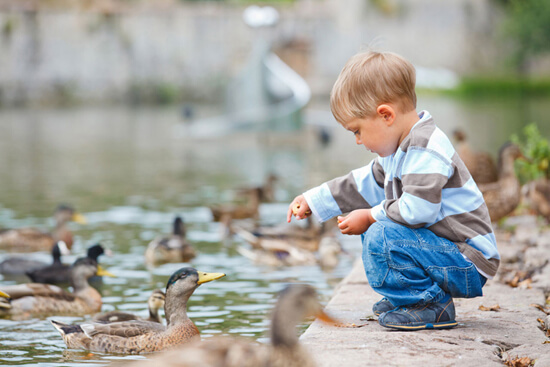 If you want to lead a tribe, feed them first 🙂

The best tribes are assembled around some value proposition and served generously by the few capable of directing and organising.

He follows up with, “A crowd is a tribe without communication.”

Like-minded individuals forming around a cause, movement or shared interest is natural in the social order of communities.

Because the book was written back in 2008 the examples of social media sites are limited to Facebook, Twitter and a couple other sites. 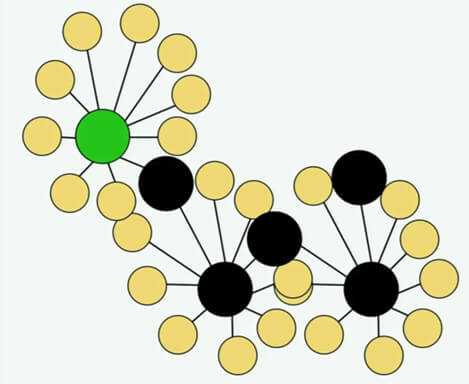 Find evangelists for the tribe

As you are no doubt aware, social media websites are designed around our hardwired social behaviours – the perfect way to connect to like minded individuals.

Godin argues that true connection has nothing to do with technology. Tools are just a means to an end, a way to enhance relationships.

Unfortunately, the book doesn’t address trolling, bullying, harassment and the outright narcissism that comes with these sites.

The book gives examples of tribes, but I’ve written my own examples to try to reflect the zeitgeist for fellow UK readers.

They differ in size and geography. Whether you agree with the politics/ideology/subject of each tribe is beside the point.

Obviously negative tribes with nefarious agendas exist too. These could include terrorist cells, crime syndicates or even Chris De Burgh fans.

Then there’s mediums, televangelists and other such hokum.

Throughout the book Godin cites examples/case studies that bring positive change rooted in some kind of valuable servitude.

One such idea is that you don’t actually need many follower fans as long as you engage and interact with them. It could be less than a dozen or a few hundred. Some of us would love to lead millions but would probably settle for 1000.

Check out this entry from his blog in 2008. He links to an interesting post by Kevin Kelly, the founding editor of Wired.

Kelly writes that 1000 true fans can radically transform your life and enable you to make a living.

Here’s a video in which the author describes reaching out to the tribe to ask for money, and why it was successful:

Why Should YOU Lead?

A running theme in Seth Godin’s books is fear. The fear of failure, the fear of looking ridiculous, of attracting blame.

Question: Why should you lead?

Answer: Because no one else has bothered to step up.

If there isn’t a website, club or Facebook group, go ahead and set one up! If no one is attempting to fix something that’s broken, see what you can do about it. What’s the worst that can happen?

If no one joins your cause, has it cost you anything apart from hurt feelings?

I admire Brian Eno, the synth wizard and recording studio enthusiast of the 1970’s.

Famously, he spent time in the band Roxy Music before going on to invent ambient music and work with huge names in the music industry. 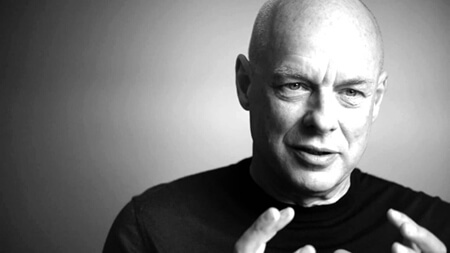 Besides baldness, Seth Godin and Brian Eno have a few other things in common.

They share a desire to scratch the following itches:

I recommend watching this video below in which Eno discusses, among other things, the temerity of creation and the indoctrination of received tradition.

Eno remarks that after thousands of years of Judeo-Christian ideology , with its classical top-down belief system surrounding creation, Charles Darwin taught us that creation has simple origins from the bottom-up.

Why You Should Be Exclusive

Let’s be reminded that belonging to a group is hard wired as part of our human nature. These groups wouldn’t be attractive if everyone was allowed to join.

If you haven’t seen the film Quadrophenia (it’s Rockers versus Mods all throughout) you’re in for a treat. It is a good schooling on why people identify with sub cultures and the importance of having a sense of belonging.

On page 89 Godin remarks, “Exclusion is an extremely powerful force for loyalty and attention. Who isn’t part of your movement matters almost as much as who is.”

Another reason to target smaller, specific audiences is that you’ll have more success with targeted website traffic. Conversions are generally better. Email marketing opt in and open rates will be easier to achieve. (I assume, of course, you’ll have built a website by now).

There’s a great article here you might like: When you’re selling, you want to disqualify potential buyers.

TED Talk: The Tribes We Lead

I suggest watching the talk below because the author makes a compelling case for the idea of finding, leading and connecting the right people to one another.

“Seth Godin argues the Internet has ended mass marketing and revived a human social unit from the distant past: tribes. Founded on shared ideas and values, tribes give ordinary people the power to lead and make big change. He urges us to do so.”

Analysis: Philosophical & Eye-Opening, While Taking a Step Back

Be warned – this book isn’t for the sheepwalkers of the world, waiting to be told what to do. Arguably, it has become the unofficial manifesto among proactive marketers who mean to make a difference.

If you persist with the broadcast style hand-me-down cry for attention characterised by billboards and aggressive sales pitches, you’ll bleed yourself dry.

For example, Pay Per Click ads. While paid ads have their place in a strategy, they just get you clicks – not necessarily an engaged, organic following.

Real connections laced with mutual benefits are a much better way to earn rather than purchase the attention of your market.

It inspired me to relaunch a website I built for an unofficial news/views surrounding the development of a local railway station. The town I live in has been without a station for almost 50 years and it’s finally about to change.

I don’t know all that much about railways or trains but I do know local residents have an itch they badly want to scratch. I lead from behind the scenes by managing web design/development, talking to local journalists and acting as a low key director of sorts.

The railway website also a lead generator for business web design clients because the pretext for our conversation is genuine.

The front cover strapline of Tribes is “We need you to lead us.” Where do your people want to go?

You can get the book online or at most good book shops. If you don’t want to purchase it, see if your local library has it in stock.