The beauty of these vector objects is that the shapes are based on mathematical calculations. Vector objects never lose quality when you scale them because you are not stretching pixels.

There are no resolution settings until you come to export the file.

I like this software for my graphic design needs but sometimes find it fiddly and unintuitive. A digital graphics tablet has been added to my wish list. There could be some opportunities for using nice brushes with the freehand effects of the tablet.

The main toolbar has dozens of options to choose from but you’ll probably need to use less than half of the available options.

Drawing vector paths requires the use of the Pen Tool – the most commonly used feature.

There’s a steep initial learning curve but the rewards are worthwhile. You can get similar results with Photoshop if you use the paths functionality but if you’re going to do that you’d be better off using Illustrator because that is what it’s designed for.

You can draw closed paths or open paths, and fills/gradients can be added to these objects. Some people use a cheap graphics tablet with the Illustrator pen tool because they can take a hand drawn approach instead of negotiating with awkward mouse movements.

The type setting tool is good, but if you’re working mainly on typographical layouts, such as brochures, try InDesign, since it is more geared towards type.

There are some creative ways to use these, especially when you intersect or combine different paths. I like to use different shapes to knock out negative space and then add strokes to the paths that have been created.

Illustrator is a HUGE program. I feel I’ve hardly scratched the surface. Overall, I’ve probably used less than 10% of the program’s features to design logos and have still gotten good results; it’s another iceberg, like most Adobe Creative Suite software!

A good design is not about how many effects or fancy schmancy bells ‘n’ whistles you use. It is about communicating visually with your audience. Always view design tools as a means to an end.

Layers work a bit different to the way they do in Photoshop.

Layers can get messy during artwork design, so consider organising and grouping them at the end.

It’s a good idea to use descriptive labels with a logical naming convention. This all sounds like a hassle but in truth it makes your project much easier in the long run.

Aim to have a working file that is coherent, especially if you’re going to be working with other designers using the same files.

Sometimes, you get sent a file where the layers are more than a little messy, and it’s up to you to pick through the untitled layers and make sense of it. This can be confusing.

A good tip for identifying untitled layers is to use the magic wand tool.

Using the magic wand, you can select various parts of your design and, assuming you have the layers window open, it will highlight the corresponding layer in the layer window using small coloured squares.

Adobe themselves have a good Illustrator CC tutorial about organising artwork with layers. The principle applies to older versions of the software too.

The following video was recorded to show the logo for this website being designed inside Illustrator. The final design is a variation on the theme shown in the screen recording.

I used some masking techniques to achieve the results I needed for the light bulb motif:

Anyone without a working knowledge of design often expect a designer to be able to “blow up” a bitmap/raster image to a size and quality suitable for print.

You just cannot enlarge a .JPEG and expect it to maintain its quality. The pixels get stretched and ruined. Your image will be blurry and the results are amateur at best.

Amazingly, some businesses still cannot see this even when it is explained to them in detail. They settle for disgraceful, low quality design which wastes their money and damages their their brand image – literally.

If you’re serious about your logo, business card and others marketing materials, commission the project to be created by an experienced designer using vector software.

Hell, it doesn’t even have to be Illustrator. Corel Draw is an alternative capable of producing professional graphic design. 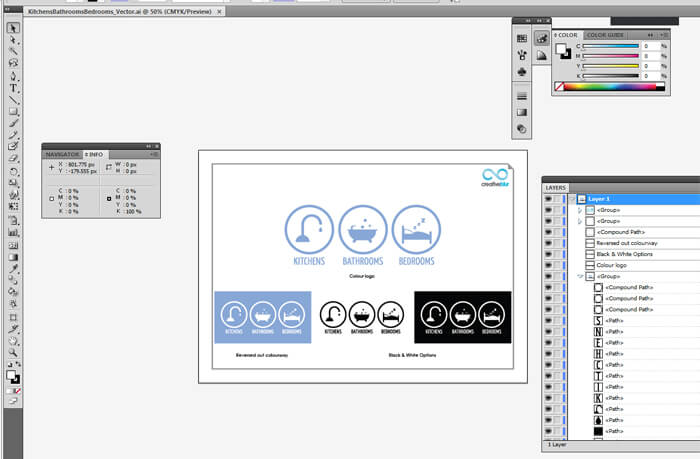 Vector paths are painstakingly drawn by the designer and can be adjusted or enlarged. The lines and shapes that make up a vector design are elastic.

When it comes to scaling up those designs, it can be done without any problems. This way, your vector logo is future proof.

Web design images are rendered at 72 pixels per inch, whereas print design (with the exception of classified newspaper ads) is usually at a minimum of 300 pixels per inch.

Approach your website design from a print design mentality. Make a crisp, high quality image suitable for anything and everything and scale it down from there.

It’s harder to back track. If you have what you need from the get-go life will be less tedious. That’s a promise.

Most designers will supply graphic artwork in the native .AI file used by Adobe Illustrator.

You can hand that file over to a different designer/artworker and have them work on it. 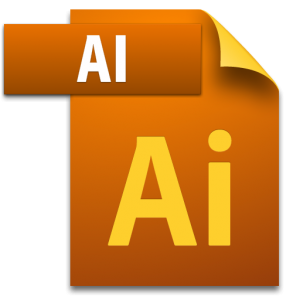 Using a proprietary suite of tools like those created by Adobe does offer a better workflow experience.

The files can be easily copied to USB sticks along with supporting documentation or material. I will often send an mp3 recording of myself talking to the client so they have something to listen to while they look at the artwork they’ve received.

The following video is something myself and one of my design colleagues produced for a client.

We recorded the sound and then added screenshots from within Illustrator to show how the logo had been constructed.

More than anything we wanted to emphasise the flexibility of using the native file format.

The video has been publicly posted to my web design company website and is available for other prospects to view.