Update 12th November 2015: The EU is reviving the idea of making links subject to copyright protection

Update 9th July 2015: The link tax has been rejected at the last minute.

Today the Legal Affairs Committee of the European Parliament take a vote on a draft copyright policy report to decide how internet users may link to or share content across the web.

This “freedom of links” fiasco is the latest blunder and error of judgement dreamed up by a cross section of idiotic legislators wanting to control or suppress online communications.

The “Open Internet” Will Close

While there is a valid case for copyright reform, meddling lobbyists representing old fashioned media conglomerates are planning to censor hyperlinks in their attempts to manipulate the right to use the Open Internet as it was intended. This will add serious friction to the use of the internet.

This EU move is one of the worst I’ve ever seen, and could undo the last twenty years of link based search engine aggregation algorithms. It makes the EU VAT problems pale in comparison.

Please take a moment to read the warning article that brings the offending subject to light titled as why legislators are attacking the right to create links and what you can do about it.

Yes, that is a hyperlink and it is pointing at a blog post written by Heather Burns. She has been a constant voice of reason in her blogging about digital laws, politics and the effects on website designers and developers.

If you didn’t click her article link, here are some bullets summarising what COULD happen in a worst case scenario:

All I can say to the above is:

Crazy, crazy, crazy! And that’s not even half of it!

The part in the article about the elderly legislators wanting to control internet technology they do not understand is maddening. This is an example of pure, beligned ignorance from out of touch politicians.

This knee-jerk tendency to want to crush anything that threatens the establishment is backwards and draconian.

I’m scouring the schedule for anything to do with today’s vote or any recorded debate involving Julia Reda, the member of EU parliament who wrote the copyright evaluation report. Her report was amended 550 times by people who want to weaken or reverse her recommendations.

The copyright evaluation report is explained by her on her website.

Her draft recommendation include the following bullets:

If the 500+ amendments are successfully voted, the legislation will look nothing like the draft proposals.

You could be facing situations where you are legally responsible for the content of a website AFTER you’ve linked to it.

If that’s the case, what is to stop the webmaster/owner of the website doing a 301 redirect or a “bait and switch” therby publishing illegal content? Would you be in breach of copyright because of the page you linked to?

Let me quickly tell you about the Playboy magazine copyright court case in which the solid history of hyperlinking came undone.

Playboy magazine brought a case against a Dutch blog called GreenStijl.nl that touts itself as “biased, unfounded and needlessly offensive”, taking a provactive tone towards other websites and blogs. For this reason, I have not hyperlinked to GreenStijl.

Anyway, without dragging it out, I can tell you GreenStijl.nl published an article linking to leaked nude photos of a Dutch model intended for the December 2011 edition of Playboy.

Naturally, Playboy – represented by the publisher Sanoma in the Nordic countries – asked the media company hosting those unauthorised photos to cease/desist/delete. The media host – FileFactory – complied and removed the photos.

While FileFactory complied, GreenStijl.nl continued to link out to other websites where the leaked photos were available.

At the time, the Court of Justice for the European Union had some pretty shaky definitions on what to regard as a “communication to the public” and seemed to indicate copyright infringement was not defined by linking to what was “freely available” online elsewhere.

In other words, if a website contains protected material but is accessible publicly, then hyperlinking to that site does not constitute a copyright breech. These laws, it seems, are what are under review.

Sonama successfully sued GreenStijl, by the way. You can read about it here.

While copyright infringement is a HUGE issue, the answer does not have anything to do with blanket legislation.

This is what is known as a beneficial crisis – and it is well known to bureaucrats in Brussells.

To add some weight to this theory, note how the EU seem to be interested in building an army to stand off against Russia – a beneficial crisis brought about from deliberately poking the Russian bear.

Similarly, a hyperlink mandate from frightened old men demanding the monitoring of user activity, stricter content filters and freedom of expression is mad.

Of course, whenever the phrase “freedom of expression” is used in a sentence, it is usually challenged with a chorus of “but what about the terrorists?!”

Tim Berners-Lee has been critical in the media recently in light of the UK governments snooping charter.

Berners-Lee went as far as to say there should be a 21st Century Magna Carta. Great. The problem there is: all governments want a “Magna Carta” as long as it serves their interests.

Let’s not forget the whole point of the European Union was to create a trading zone with fewer barriers for members states.

The UK are part of the EU yet the barriers have been built higher because laws like EU VAT has been implemented at the wrong level. EU VAT was designed to curtail the Amazons of the world yet small businesses got a good hard slap in the face because the bureaucracy was meant for corporations.

US tech corporations have also been at odds with EU member states, notably with accusations of industrial espionage involving Germany. Relations between the US and Europe seem to be waining.

For example, Google shut down its Spanish News aggregation service as a reaction to Spanish copyright law requiring payment for links to Spanish newspapers.

This came after a long winded mitigation in which German publishers demanded monies from linking and using content snippets, citing the German ancillary copyright law.

While lawmakers bicker, squabble and generally raise their own uniquely unqualified voices, they need to remember censoring the web is like applying a curfew to teenagers – they’ll only sneak out when you’re not watching.

Nothing can be achieved from a law that will be impossible to police.

Besides, the web already has a voice, and from the day it was invented it has being saying, “I link, therefore I am.” 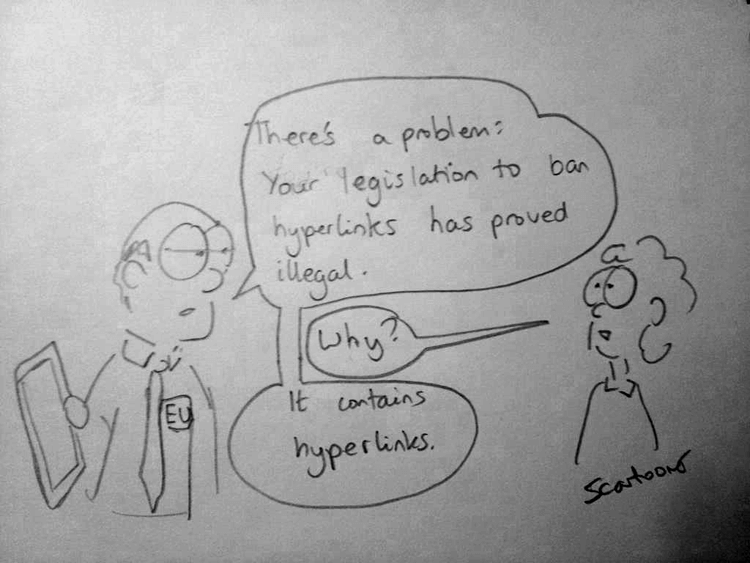 What will happen to social networks? Users share links all day on Twitter. Seriously, what on earth is happening here?

Surely this will affect the rest of the world too, just as VATMOSS and EU VAT affects US webmasters and businesses? The creeping federalism is undermining the original EU idea of a common market.

Let’s hope the outcome of today’s vote doesn’t fly in the face of the founding principles of the Open Internet. We’re beginning to see a United States of Europe take shape and it is scary. 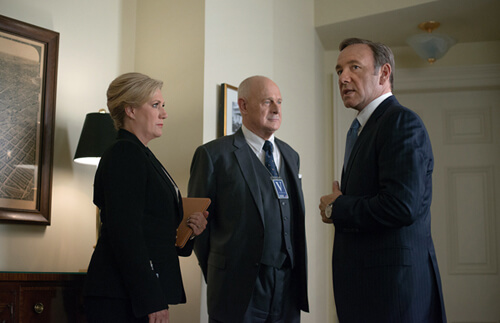 Honestly, I watch these European Commission stories unfold like one of the plot lines from the political drama series House of Cards.

Looming lobbyists like Raymond Tusk doing deals with Frank Underwood types give me the chills.