Last week I saw a trailer for the 2013 series of The Apprentice on the BBC. The contrived comedy and pretentious dramatic style seemed like over kill for what is basically a gameshow.

In fact, the trailer caused me to use a facial expression resembling Lord Sugar looking characteristically sour. I knew I was witnessing what heralds another 12 episodes of car crash television. 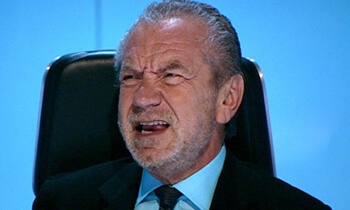 We all know The Apprentice stopped being about business and enterprise when it moved from BBC2 to BBC1 in 2007.

It became a means to score ratings off the back of a carefully chosen bunch of narcissists, braggers and bullies generally representing the worst society has to offer.

It hasn’t always been this way though. 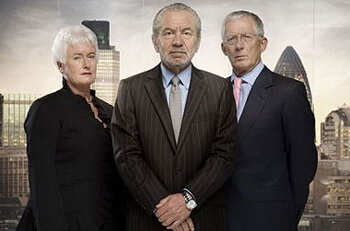 When it was originally broadcast I was studying at university and saw a parallel between the group projects me and my fellow students were expected to complete.

The televised tasks the candidates were competing in were interesting.

I genuinely looked forward to watching each week and the BBC’s decision to broadcast it on BBC2 seemed the right one.

Skip to 2013 and it is obvious the format has been tweaked and adulterated to its own demise.

Lord Sugar continues to defend this badly behaved abomination like a father defending a child who has been caught on CCTV vandalising the neighbourhood.

The Apprentice has turned into a weekly one hour slideshow of hated cartoon characters clambering over one another with the occasional decent person included as a novelty representation of integrity.

It’s sad that narcissism is celebrated so much on TV. Here’s what the general TV viewing public say to integrity:

“Yawn! We don’t want intergrity, we want backstabbers! Backstabbers are cool and funny!”

It’s like we’re being subjected to the cast of Big Brother, except they’re now wearing ties.

Without watching a single episode of the Alan Sugar’s series I know the following statements are true:

What irritates me about the series is the linear assault course format.

You might compare it to an unfriendly edition of It’s a Knock Out where the candidates are encouraged to eventually betray one another.

There’s also another thing that bothers me; negotiating, selling and networking are all part of running a business, but those things are taken care of by the BBC who set up EVERYTHING including sales leads and distributors.

They even line up treats awarded to the contestants on the winning team. Starting and running a business from scratch can be a thankless task.

I would much rather watch a business television show in which reality takes precedence over pantomime.

Admittedly a real televised business would be pretty boring to most but would at least demonstrate the work and occasional drudgery involved.

Those who fancy themselves as entrepreneurs might think twice before getting involved in something that may add up to no more than delusional roleplaying.

In September 2012 BBC3 broadcast Be Your Own Boss fronted by Innocent Smothies co-founder Richard Reed.

While frothy in places and with one or two artificial additives it was more palatable than The Apprentice or Dragon’s Den.

Understandably, the population at large do not want to tune in to watch struggling businesspeople in offices.

We don’t want to watch people make phone calls and write emails. We do that in our office jobs daily already!

What viewers crave is drama and failure. It explains why Eastenders is so popular.

The reality of running a business is not sexy enough to warrant a chunk of prime airtime. I’ll be the first to say that.

Television is always at the mercy of some dick head with a clip board of statistics telling the department to sand down the rough edges and include more drama.

Because of this producers chasing ratings are throwing in elements of the Victorian freak-show knowing it is the equivalent of waving bright objects at a cat.

I’ve known people who fancy themselves as entrepreneurs having watched films like The Social Network or after reading stylish business thrillers like The Google Story.

They butter themselves up with grandiose notions and go jumping in the deep end only to come unstuck. Actually, it’s more of a running dive bomb.

Often, desperate people in desperate circumstances are not serious about what were only ever half-baked desires.

I can tell you from experience, persuading customers to buy from you is never as easy as you think. Business is not easy, especially in the abundance economy of the connected world.

Here’s the problem: Alan Sugar’s game show presents the notion that running a business is a sprint for the uninitiated when it is a marathon for the committed.

What You See Is Not What You Get

“Richard Branson started an airline, and people think business is easy,” said Alan Sugar himself in an interview a few years ago. “But they never consider all the legwork he put in.”

What has happened to Lord Sugar since?

Has he allowed the BBC to meddle too much or was the series never his to claim ownership over?

Was the series always doomed to turn into a shallow rat-race serving prime time entertainment for those wanting to unwind in the evening?

I’ve read interviews with Sugar and he seems to have a genuine soft spot for the series, yet surely he knows the razzmatazz is over done?

For the record, I have read his first book “What You See is What You Get” and found it pretty interesting.

In the later chapters he writes at length about the frustration he felt dealing with BBC television executives and I wonder if the phrase “a camel is a horse designed by committee” holds true here.

Is there anything useful to be learned from business on television or does it just encourage have-a-go businesspeople to naively trifle with matters they don’t understand?

Do you have an opinion on the subject? Am I dead wrong? Or about right?

Perhaps it’s my cynicism for tacky television. I just know I can’t stand hype, drama and conceit… especially when it’s spoon fed to to well meaning but incompetent people who are destined to fail.