For years I’ve been telling people, “I’m not bothered about owning an iPad. I don’t need an iPad, they’re for hipsters and show offs.”

This was my position until 2014 when I bought an iPad.

Let me make my position clear on technology and why I performed this U-turn.

When I spend money on gadgets, I need to know it’s a worthwhile investment.

There has to be obvious work related benefits as opposed to playing games like Angry Birds. 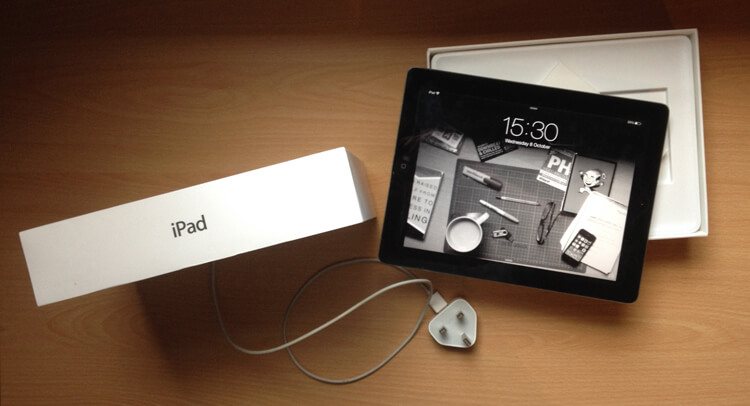 To me, gadgets like the iPad should offer solutions to business problems. In my mind, these (very) impressive micro computers should be regarded as tools, not toys.

If you’re running a business you have to ask yourself if the gadgets you buy really are useful. 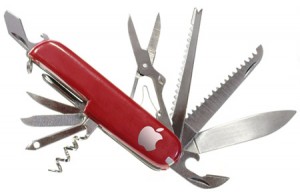 Let’s face it: the drooling masses are forever associating themselves with flavour of the month and Apple seem to position themselves well when it comes to must-have gadgets.

It took me a while to realise the Apple tablet was what I needed for my operations.

Okay, Apple have never exactly touted their tech as being for business.

However, Blackberry always DID try to tell the world they were the ones to offer a product meant for business, and look what happened!

My Blackberry Curve 8900 shit its pants daily until I got tired of holding my nose and bought the iPhone.

The way in which product expectations fall short of the hype is the reason I stayed away from Apple in 2009 and 2010.

The Cult of Apple

So, for years, I’ve been missing out on an excellent tool which meets my needs.

It took me 5 years of kissing frogs to fall in love with the real charms of the iPad because of Apple’s ridiculous marketing and advertising. I felt Apple were getting in the way of their own product.

Though I dislike the Daily Mail, this article from 2010 perfectly explains my feelings towards the “cult” of Apple.

To be fair to Apple, they were probably never targeting people like me to begin with. I felt they were always aiming to impress faux geek yuppie types who think it’s fashionable to wear glasses with clear lenses.

Considering my preference for function over style, I was probably not part of Apple’s demographic and that’s why I never saw the appeal. Now that I know what can be done with Apple products as tools, I’m willing to use the technology.

A means to an end.

I’ve spoken to a few small business owners who felt they needed a tablet device they could carry daily and use for writing emails, monitoring social media, making notes or even recording voice memos.

The native apps include the FaceTime and Messages which allow free communication between iPhone, iPod and Mac users.

There’s the other standard apps like the Camera, iTunes and the App Store.

Google Maps and a few other things come in handy, but you’ll need WI-FI for some of these. If you’re out and about, you’re going to need to find an internet hotspot. My local library offers free WI-FI so it’s great to use that! 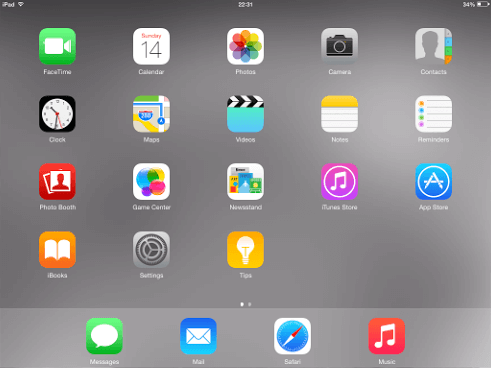 You can sync the iPad with your PC if you install the Windows version of iTunes on your computer, but I honestly find this a headache.

The cable I use to connect to my PC keeps connecting then disconnecting unless I physically hold the cable in place. That might be my PC USB ports, not the iPad.

If I need to quickly get a photo or video clip off the iPad and on my Windows computer (for editing usually) I’ll either email it to myself or use DropBox to transfer the files over the airwaves and avoid having to use the cable to sync with iTunes.

Installing too many apps can cause your battery to run down so keep this in mind. 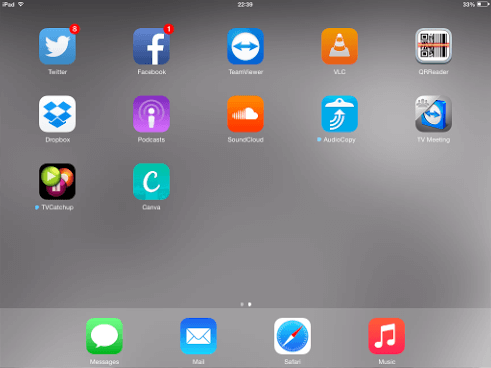 One of the first things I did with the iPad was create an Apple ID.

An Apple ID is an all-in-one account used to log into various online systems that Apple Inc. offer for most of its products including  iWork, iCloud, the iTunes Store and the Apple Store.

You register using your email address from any email provider and use the same ID across all Apple devices.

So, if you install an app on the iPad it will appear on your iPhone too. It synchronises.

When DropBox was installed to my iPhone, it appeared on my iPad. This autonomous app functionality across devices has been very handy. 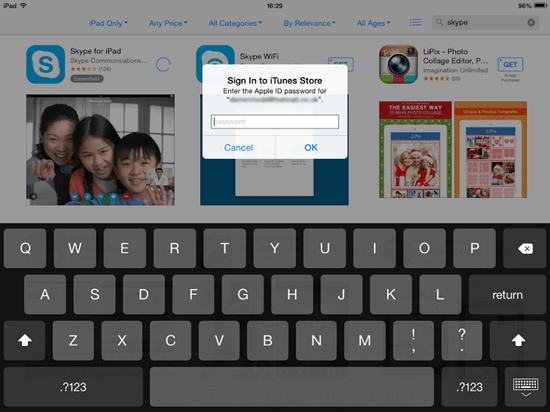 In work and business projects I’d always used a traditional desktop PC. I’d usually use the PC for browsing information too.

My newly acquired tablet made a welcome change by browsing wirelessly using the home WI-FI. 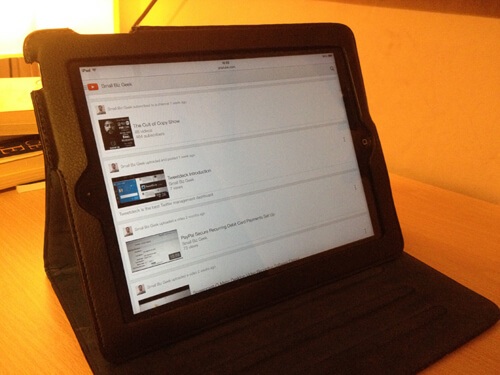 Adding my router details to the iPad was unbelievably easy. In the past, Windows devices like laptops never worked on WI-FI at all, and adding my BlackBerry Curve device to the router meant having to access the I.P. address of the Virgin Media superhub to manually configure it.

Now, I just need to go into the iPad settings to search for my router, choose to connect to it and, when prompted, enter the password. It just works without incident.

As I mentioned earlier, tapping into a free WI-FI source is very easy. My local library has an unsecured but safe network, so all I need to so is search for the network while in range and the wireless router belonging to the library will pop up.

Even when the library is closed, I can stand outside the entrance and still get a connection. This was handy a few months ago when my home internet connection failed. I was able to get online long enough to  discover Virgin Media were dealing with the connection problems for my street. 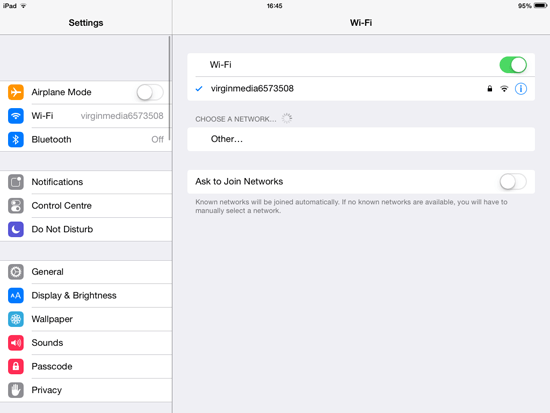 Another reason I purchased the iPad and iPhone is with the understanding that we use these devices have and will continue to make a major impact on the web design. 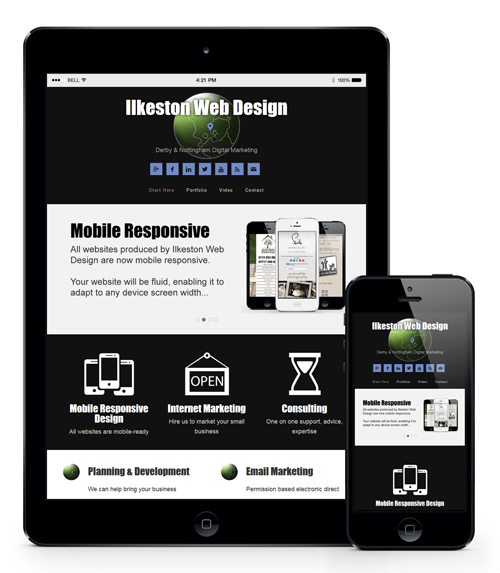 It is safe to say mobile internet device usage has overtaken the traditional desktop PC.

The graph below is taken from: How do we use the internet and mobile devices in 2014? 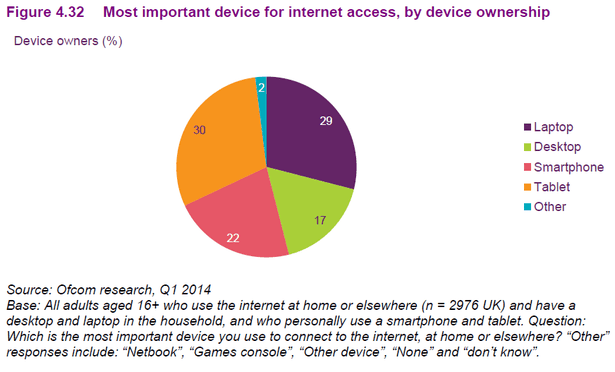 If you want to design mobile websites that are easily displayed on tablets and phones, owning a tablet or internet phone is a logical step to putting yourself in the shoes of those using the internet this way.

Considering that people use their finger to press buttons on the touch screen, you can figure out how large to make those buttons on a website when it is in tablet mode.

Give Your Desktop PC a Rest

Powering up a desktop PC every day since 2006 has made me realise computers DO wear out over time with excessive use. I’ve been through several hard drives, keyboards, monitors and graphics cards.

Besides, booting up the desktop can sometimes take time, especially if there are Windows updates waiting. I’ll be sitting in my swivel chair, waiting for the bloody thing to get going, glancing at my watch. It’s easier to grab the tablet, take it off screen lock and do what needs doing.

My experience with Windows technology has always been one fraught with friction and headaches, like an exhausting nightly bedtime negotiation between a difficult child and a hapless parent.

The iPad rarely crashes or locks up. I’ve had one or two issues with Safari shutting itself down, but that is usually a reminder to clear the history. This is nothing compared to Mozilla Firefox, which crashes most days on my PC and causes aggro.

If you have issues with the iPad crashing, you can always try a hard reset by holding the power button and home button together until the device restarts.

Does your device take ages to charge? You might want to purchase a higher wattage charger.

Many Apple users have both iPhone and iPads so they sometimes use the same charging adapters. 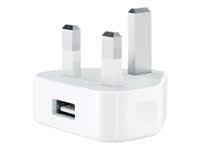 Originally iPads were shipped with the 5W USB charger plug but I’ve noticed mine was getting very warm. It was taking up to 10 hours to give me a battery at 100%.

There’s a discussion on the Apple UK forums about 12W chargers versus 5W chargers. 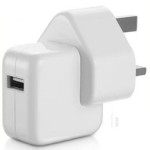 So… you COULD get one of the 12W charger bricks for the iPad but make sure you get the correct plug type for wherever you are in the world.

If you’re in the UK you want the BS 1363 three pronged plug. If you buy the two pronged U.S. version you’ll need to buy an adapter to use it in the UK.

Another way to get your Apple device charged faster is to put it in Airplane Mode.

It is tempting to go to eBay or Amazon and pick up a cheap charging plugs or leads. Here’s my advice: DON’T.

Marketplaces such as eBay are rife with Apple accessories claiming to be “100% Genuine” and the amount of items displayed as “Sold” on the product listings pages may inspire confidence in your purchase decision.

I can only speak from my own experience when I say the knock off lead I bought from eBay has been gradually failing.

The fake lead (advertised as 100% genuine) just doesn’t seem to plug into the iPad properly any more. I have to physically hold it in place to get the charging icon to appear on the top right of the screen. 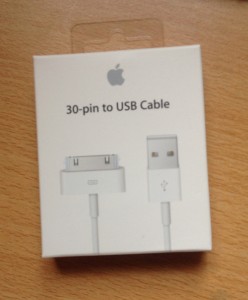 Most people simply do not want to pay £15 for an official Apple charging accessory when they see it cheap elsewhere online.

As I write this, I’m about to purchase a brand new Apple USB lead for my iPad and iPhone 4s.

It’s more than I want to pay but I don’t want to risk any damage to my device.

Get a Used Model

The reason an iPad found its way into my possession was because a friend mentioned he could give me a used, older generation model for the very reasonable sum of £150.

What I ended up buying has some superficial damage such as scratches on the screen, but this isn’t a problem.

Then I found the sound doesn’t work! But this can be repaired for a small sum.

You don’t necessarily need to pay full price unless you feel it’s important to get a warranty.

I don’t know how you get on with Apple and the iPad. Do you own one? Is it used or did you buy it new?

Are there better tablets you can tell me about? I was in the supermarket recently and noticed there were magazines dedicated to the iPad amongst other tablets. 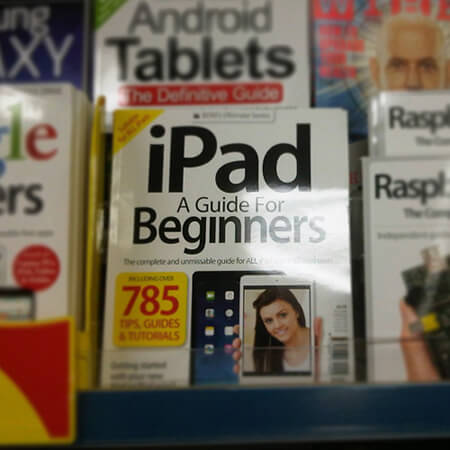 Apparently, the Windows tablets are not as bad as I imagine most Windows products, but that is probably because I’ve never forgiven them for Vista!

We are bombarded with advertising trying to subjugate consumers with rhetorical devices, logical fallacies and false dichotomies.

Hyped up advertising smacks of cult propaganda or partisan politics. This is why Apple have historically put me off their products.

Despite my reservations I have ended up envangalising the iPad. I’ve not found a better tablet yet, but then, I’m not an aficionado of tablets.

In the end, it was talking to other people like myself who were able to give an honest appraisal of the technology and allow me to join the dots on my own. This is why and how I’ve come to see computer gadgets like the iPad as problem solving business useful tools.

Please tell me how you get on with the iPad and share any tips.